This is the week where we celebrate Rev. Dr. Martin Luther King, Jr’s birthday. There are several events celebrating the legacy of various leaders from the Civil Rights Movement as well as various others held in opposition to the upcoming presidential inauguration. This list is intense (30+ events) so if you’re overwhelmed check out my shorter list at I Don’t Do Clubs. Also it’s my birthday! As a birthday gift subscribe to and share my newsletter. Friends don’t let friends be bored in Houston.

1963: A Year in the Life of Dr. Martin Luther King, Jr.
Monday, January 16, 2017, 1:30 p.m. – 2:30 p.m.
A continuation of an annual series performed by children of Third Ward recounting events in the life of MLK. It’s taking place at the Debakey VA Medical Center Hospital. Details are in the picture above.

19 Days in January Screenings: V for Vendetta
Monday, January 16, 2017, January 19, 2017
Rec Room is hosting a series of free screenings and community discussions each night leading up the presidential inauguration. They’re all politically themed and if you’ve never seen V for Vendetta you’ll love it. If you have, you probably want to see it again. Learn more here.

Screening: “Get In The Way: The Journey of John Lewis”
Monday, January 16, 2017, 6:00 p.m. – 8:00 p.m.
Civil Rights Movement legend and Congressman John Lewis has been in the news quite a bit recently for his public criticism of our president-elect. This free screening shows the first biographical film about a man who marched with Rev. Dr. Martin Luther King, Jr. on a national holiday in the historic Eldorado Ballroom. Learn more here.

Wangechi Mutu “The End of carrying All” Exhibition
Monday, January 16, 2017 – January 26, 2017
Kenyan artist Wangechi Mutu explores issues of African and feminist identity. You may have seen her name being brought up as one of Beyonce’s favorite artists. This video follows a woman’s played by Mutu traveling across a barren landscape. Learn more here.

Race in America: Remembering Our Strides & Exploring Our Future
Tuesday, January 17, 2017, 5:30 p.m. – 8:00 p.m.
This panel discussion has a group of Houstonians with a wide range of experiences coming together for a town hall discussion on race. Learn more here.

How to Meet With Elected Officials Training
Wednesday, January 18, 2017, 7:00 p.m. – 8:30 p.m.
Join the Texas Organizing Project to learn how to build relationships with elected officials and hold them accountable. Learn more here.

PO-UP for Plus Fest.
Thursday, January 19, 2017, 5:00 p.m. – 8:00 p.m.
Fresh Arts is holding another of their Cultured Cocktails events at Boheme in support of Plus Fest, a one-day, interdisciplinary art and poetry event coming on May 27. 10% of drink sales during this time will go to the festival. Learn more here.

Chanelle Benz – “The Man Who Shot My Eye Out Is Dead” book signing and discussion
Thursday, January 19, 2017, 7:00 p.m. – 8:00 p.m.
The short stories in this Houston author‘s debut collection covers a very wide range of topics and has received some promising reviews. These free events are a great excuse to check out my favorite bookstore in Houston. Learn more here.

BLMHTX We Are Watching Teach-in/Working Groups Convening
Thursday, January 19, 2017, 7:00 p.m. – 8:30 p.m.
BLMHTX is doing the radical work of imagining and creating a world where Black lives matter. Join a working group or attend the teach-in to learn how to develop systems of accountability for elected officials. Texas Organizing Project is having a similar event on Wednesday. Learn more here.

Etta’s Grand Opening
Thursday, January 19, 2017, 7:00 p.m. – 10:00 p.m.
If you’ve been to Bar 5015 on Sundays you’ve had food from Etta’s Kitchen. Hear the same music from DJ Big Reeks and enjoy some cocktails while learning about the upcoming events and classes. Learn more here.

Squad Up Thursday at Arlo’s Ballroom
Thursday, January 19, 2017, 10:00 p.m. – 3:00 a.m.
DJs Dayta, Jay Tovar, and Mentoz Sarmiento are spinning. The music will be great, the drinks will be cheap, and the fog machine will be fogging. Learn more here.

Rice Business Diversity and Inclusion Conference
Friday, January 20, 2017, 8:30 a.m. – 5:00 p.m.
Sparking Success, the Rice Business diversity conference, is designed to provide a forum for awareness, dialogue and skill-building around issues of diversity and inclusion as it relates to the business world. Learn more here.

Self Love Artist Exhibition – Opening Reception
Friday, January 20, 2017, 6:00 p.m. – 8:00 p.m.
See how women artists explore their views of themselves and meet other art enthusiasts over refreshments. The Community Artists’ Collective always shows exceptional works by Black and female artists, and you can see this exhibition until it closes April 29. Learn more here. 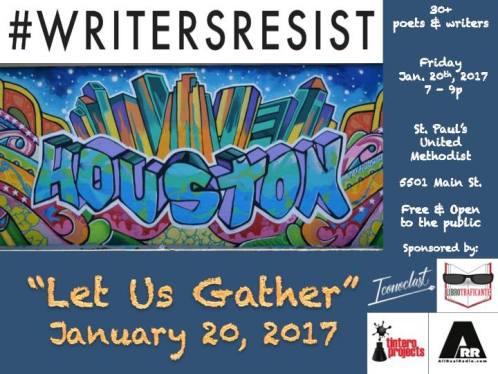 We Belong: Houstonians of Muslim descent dissent
Friday, January 20, 2017, 8:00 p.m. – 1:00 a.m.
Come out to hear Houston musicians who are Muslim or from Muslim families perform at Walter’s downtown. A good time to show support even if you aren’t a part of that community. And I love Walter’s as a venue! $10. Learn more here.

Positive Self-Talk: New Year Edition
Saturday, January 21, 2017, 11:30 a.m. – 1:30 p.m.
This positivity journaling workshop and vision board session will be a great way to start off 2017. There will also be an organic smoothie pop-up from black-owned Good Life Organics. $11. Learn more here.

Mahalia at The Ensemble Theatre
Saturday, January 21, 2017 – Sunday, February 26, 2017
This play about famous gospel singer Mahalia Jackson opens with previews on January 21, 22, and 25. Her relationship with Rev. Dr. Martin Luther King, Jr. and the Civil Rights Movement are explored in this musical. Learn more here.

1800StopSnitchin 6
Saturday, January 21, 2017, 9:00 p.m. – 2:00 a.m.
A bunch of local musicians, including android genius, HoodEthernet, REZ, slw.kng, MLCBR, and HAKEEM. I just checked out their Soundclouds and if you’re a music head or just like to dance this you’ll be pleasantly surprised. $5. Learn more here.

The Shakedown
Saturday, January 21, 2017, 10:00 p.m. – 2:00 a.m.
Every third Saturday something special happens at The Flat. I know DJs SoulOne and Keva so if you like house, garage, disco, soul, or funk and want to keep your feet moving this is a great place to be. Learn more here.

Bocage Brunches at Axelrad
Sunday, January 22, 2017, 12:00 p.m. – 3:00 p.m.
Chef Keisha Bocage makes delicious food. Axelrad is one of the best bars in the city. The menu she has for this Sunday looks amazing and includes jerk chicken wings, oatmeal french toast, and even some vegan options. Learn more here.

My Birthday Part 2: Jaison’s Birthday Shenanigans
Sunday, January 22, 2017, 5:00 p.m. – 8:00 p.m.
Come hang out with me and my friends. We’ll play some games, eat, drink, and celebrate life. Wear what you want. Don’t worry about bringing a gift because I saw a man driving with a cheetah print haircut last week so I’m covered. Learn more here.

For more events check out the Merlex Picks calendar and subscribe to my newsletter!